Hello! What’s your name, pronouns and where do you come from?

Helloooo! My name is Jase, my pronouns are They/Them and I’m from the South East of England.

What drew you to the graphic design world?

I’ve always been very creative, but I kind of s u c k at a lot of art types – I find drawing very difficult and if I ever try to paint it usually ends up a disaster. I figured that maybe graphic design would be a good way to create things that aren’t totally terrible, and I like to think that’s what I’m doing! I’m also a big fan of music and the music scene, so the possible opportunity of working with some of my favourite bands is obviously always very exciting.

Who or what inspires you most?

I’m inspired by so much! I have a lot of mates who are also designers, and seeing their talent is always incredibly inspiring. I also love looking at cool album covers and movie posters for ideas, and when inspiration does run dry there’s always Pinterest, which is full of great stuff to look at. I’m also just very inspired by thinking about my achievements – if I ever feel like giving up, I like to look through my portfolio and be like ‘Hell yeah, I did that!’ y’know? I think it’s good to remind yourself of when you’re doing an okay job! 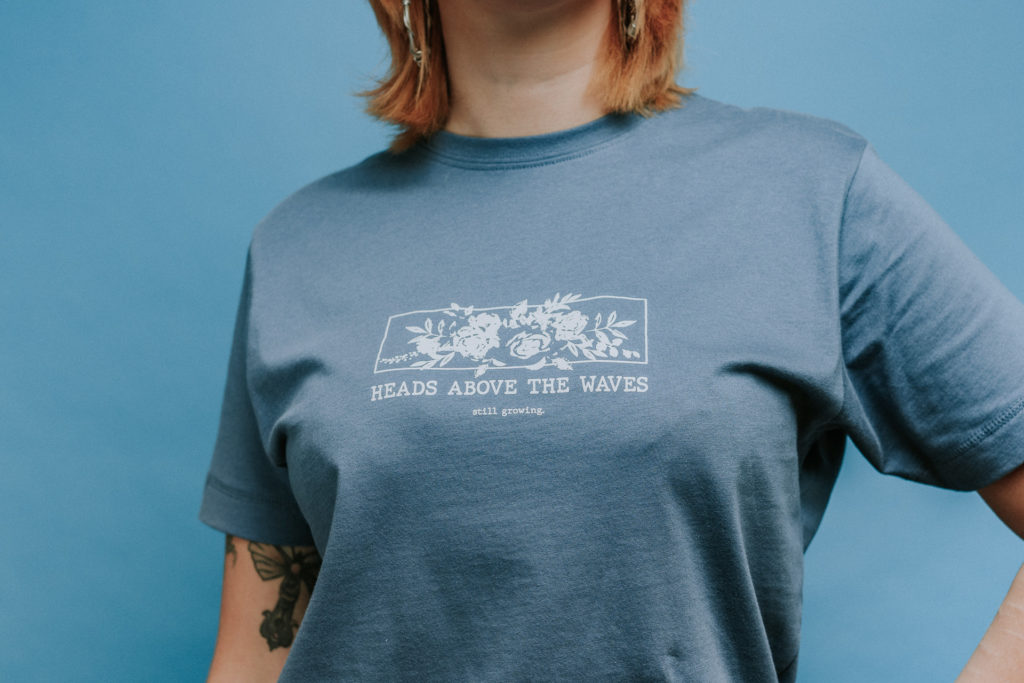 Jase’s most recent design for HATW: the ‘Still Growing’ Tee

Do you find design work helpful if you’re in a bad headspace?

Definitely! It’s so fun to just mess around on photoshop – It’s a great distraction but it also makes me feel better to know I’m being productive and making something physical. Traditional ideas of self-care like baths and walks and stuff are awesome too, and they work real well if I just need a break; but sometimes I’ll end up beating myself up more for not being productive – so I feel as if doing some casual and meaningless design work just for the fun of it is great, because it’s sort of a compromise! If that makes any sense.

Is there anything else you do to help you stay positive or get through tough times?

I love to watch a good film or play my drums! I have a ton of films that I’ve seen so many times that they’re like super familiar to me now which means if I’m not feeling too good I don’t really have to devote my brain power much, I just get to watch something that feels familiar and comforting, which is rad! There’s this film called Whip It! And its just my go-to film for when I need to feel better. Drums are more physical, it’s a great way to distract your mind as well as your body and end up putting all your energy into something creative instead of something negative, even if I’m not playing any song in particular I love to just play something fast and loud to get it all out! 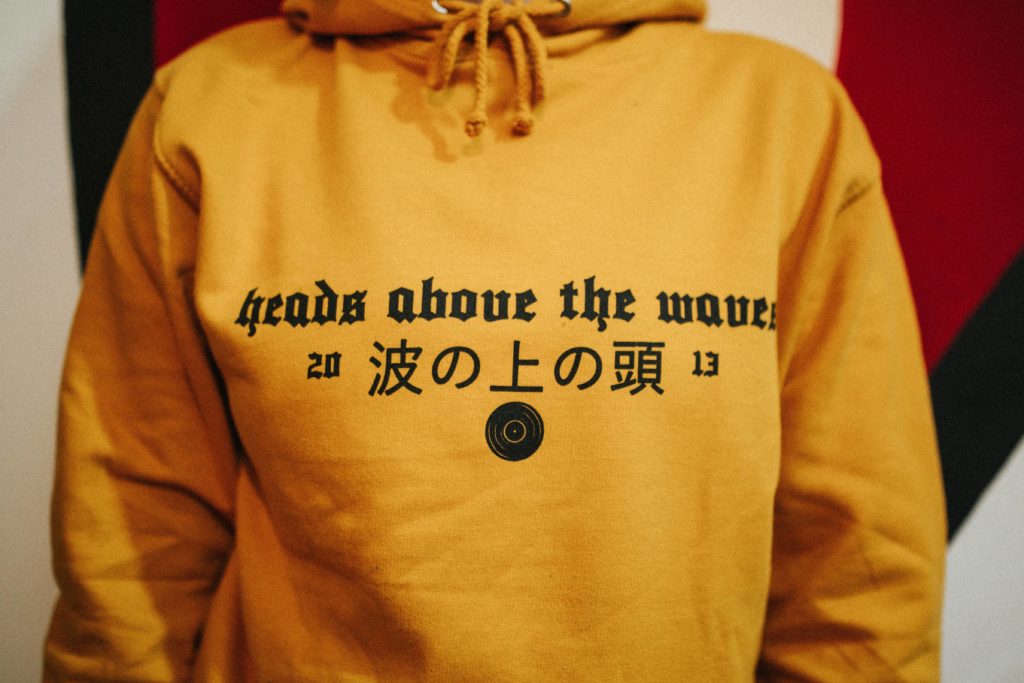 One of Jase’s first designs for HATW said ‘Heads Above The Waves’ in both English and Japanese. Sweet! 素敵!

Do you have any advice for anyone who’s maybe struggling right now?

It sounds cliché but I just love to remind myself of all the really cool things in the world. Like how I have a favourite song, and that song exists because some really cool people were talented enough to write it and that song probably exists because it was inspired by someone else’s song some time before and out of all the events and time In the universe I manage to exist at the same time as that song, kinda cool!
Same goes for movies/video games/everything really! There are so many things to enjoy in the world, and It’s very rad that we exist at the same time as them, so I wanna make the most of that y’know? 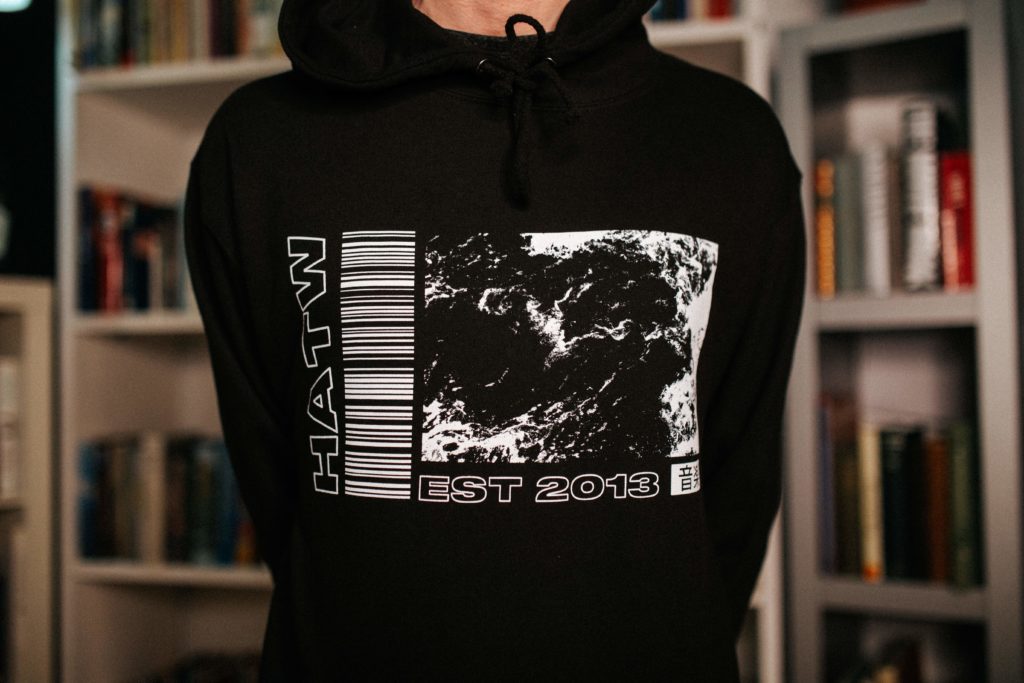 Another of Jase’s first designs for HATW was the ‘Ongaku’ hoodie; inspired by the power of music.

Have you got an example of a time where you’ve had some good support from a pal?

Of course! I love my friends, like so much. They help me every day even if they don’t know it, because its just wonderful to know that I have people in my corner! But in terms of a physical example of some great support, I went through a pretty bad breakup recently; I told my pal and then the next day them and one of my other friends came round to watch some films with me which was just so kind of them and it made me feel so much better!

Where can we find some more of your artwork?

Bonus question: what are you listening to right now?

So much! I’ve mainly been listening to an insane amount of My Chemical Romance. Danger Days is such a good album and the whole creative concept behind it is so rad. The new Taylor Swift record is also very very good, and I love a good cry to Phoebe Bridgers. 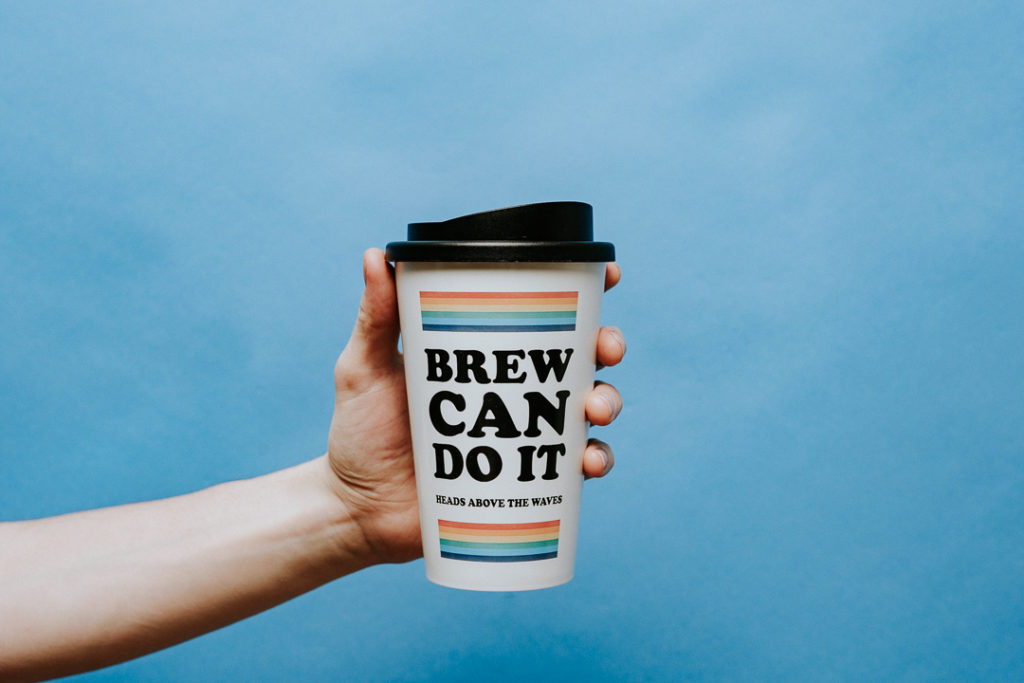 Jase also designed these pun-tastic travel mugs too for an all round posi boost!