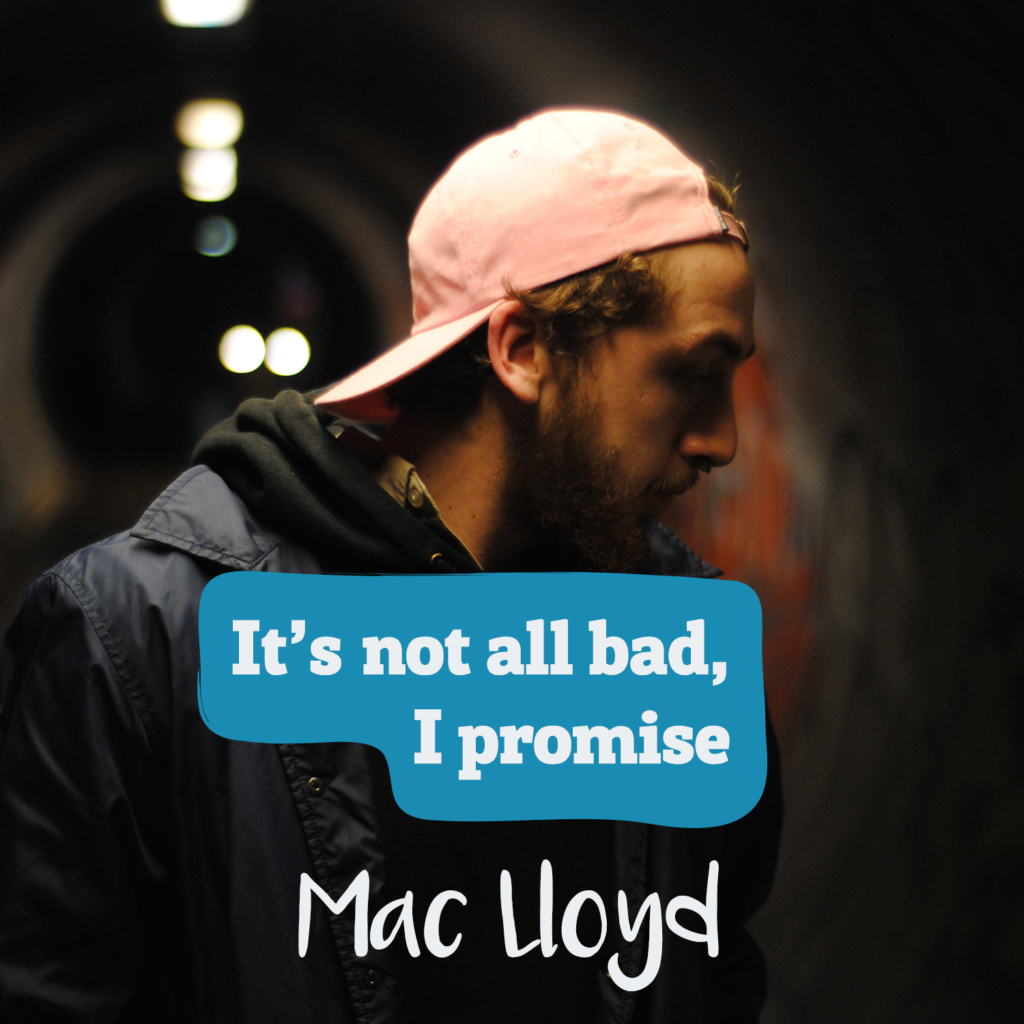 We’re stoked to share Mac Lloyd’s debut record: “It’s Not All Bad, I Promise” with you – a mix of genres colliding together to talk about loss, addiction, heartache & triumph. We also had a lil chat with the man himself about the inspiration behind the record and how he keeps his head above the waves.
– Hello there! Introduce yourself!
Hello, I’m Mac Lloyd, I write and produce a style of music that google tells me is Cocktail/Lounge Jazz, but i’ll let you all make up your own minds on that one. I’m based in Chippenham but spend a lot of time in the Bristol area collaborating and creating projects with some fellow producers for a collective called Beat Bandit Records (that’s a whole other thing though).
– Tell us a little about the inspiration behind ’It’s Not All Bad, I Promise’
Sonically I was listening to a vast amount of genre’s at the time of writing and deciding what I wanted the project to sound like jazz. I was trying to pick the genre’s apart to find my favourite aspects and cram them all together into my own style, a venn diagram of genre’s as my friend Dom (This & That Media) had put it so eloquently.
In terms of the topic matter, I just had a lot of bad situations that had happened to and around me and I just needed to vent and get them out in a constructive way. At first it was just a way to concentrate how I felt, but then quickly developed into it’s own project that I’m spending almost every day working on.
– Is there a particular message you’re looking to get out through your music?
I just want people who are feeling helpless and scared to know that it’s okay to feel that way. It’s natural in hard times or even on a day to day basis. I find that some people, for whatever reason, feel that they must remain hardened (usually through their social circle) to all of their problems without showing any weakness which is crazily unhealthy for your psyche because through weakness comes true strength, if you lie to yourself about being weak or struggling to deal with your emotions even on a basic level, you will never truly be strong when you need to be. Also don’t be afraid to ask for help. It took me a long time to understand that it was okay and you’re only gonna break your back by carrying the weight of the world on your shoulders, relieve yourself of some of that burden by asking a friend or a loved one for a chat or some advice if you can.
– Do you use music and writing lyrics as a form of catharsis?
Without a doubt. I use them as a form of understanding everything that goes on around me. I’m not great at writing lyrics I don’t think but I try to write from my own perspective as well as those that I may struggle to understand sometimes which helps me understand why people or certain situations turn out how they do.
– Is mental health something you’ve struggled with before?
Only properly over the last couple of years, before that I would get anxious and uptight for little reason but then I moved to Bristol to finish the final year of my degree and within a few months some pretty bad things happened and I wasn’t prepared for all of it to come at once. I didn’t understand why all of these things could happen around me in such a short space of time. I was lucky enough to get some counselling sessions through my university which kept me afloat mentally but after they finished I felt quite lost again and ended up digging myself into a pretty bad hole where I was taking a lot of drugs, barely sleeping or eating and my health physically and mentally just got worse and worse for a while. This went on for about 8 months after i’d left Bristol to move back home. Now i’m a lot clearer minded, i’ve managed to set myself a lot of realistic, achievable goals over the last year or so to get myself back on my feet, completing ‘It’s Not All Bad, I Promise’ was one of the main goals, which helped tremendously with getting my productivity back on track but also focussing a lot of that negative energy that had built up. By having structure and goals I became clearer minded and my perspective on what was important also became a lot clearer.
– What do you do outside of music that helps you when you’re in a bad headspace?
If i’m not making music I find it extremely hard to relax, I have a terrible work/life balance. I’ll even sit writing emails or lyrics whilst i’m chilling with friends a lot of the time. But if I can, I sit and listen to some records or get out on my board for a bit and cruise around, usually at night when no one is around. It’s incredibly relaxing and gives me the little bit of physical exercise I can get. I’ve started reading a lot more in the last year too, which helps free my mind up especially if i’m restless and can’t sleep. 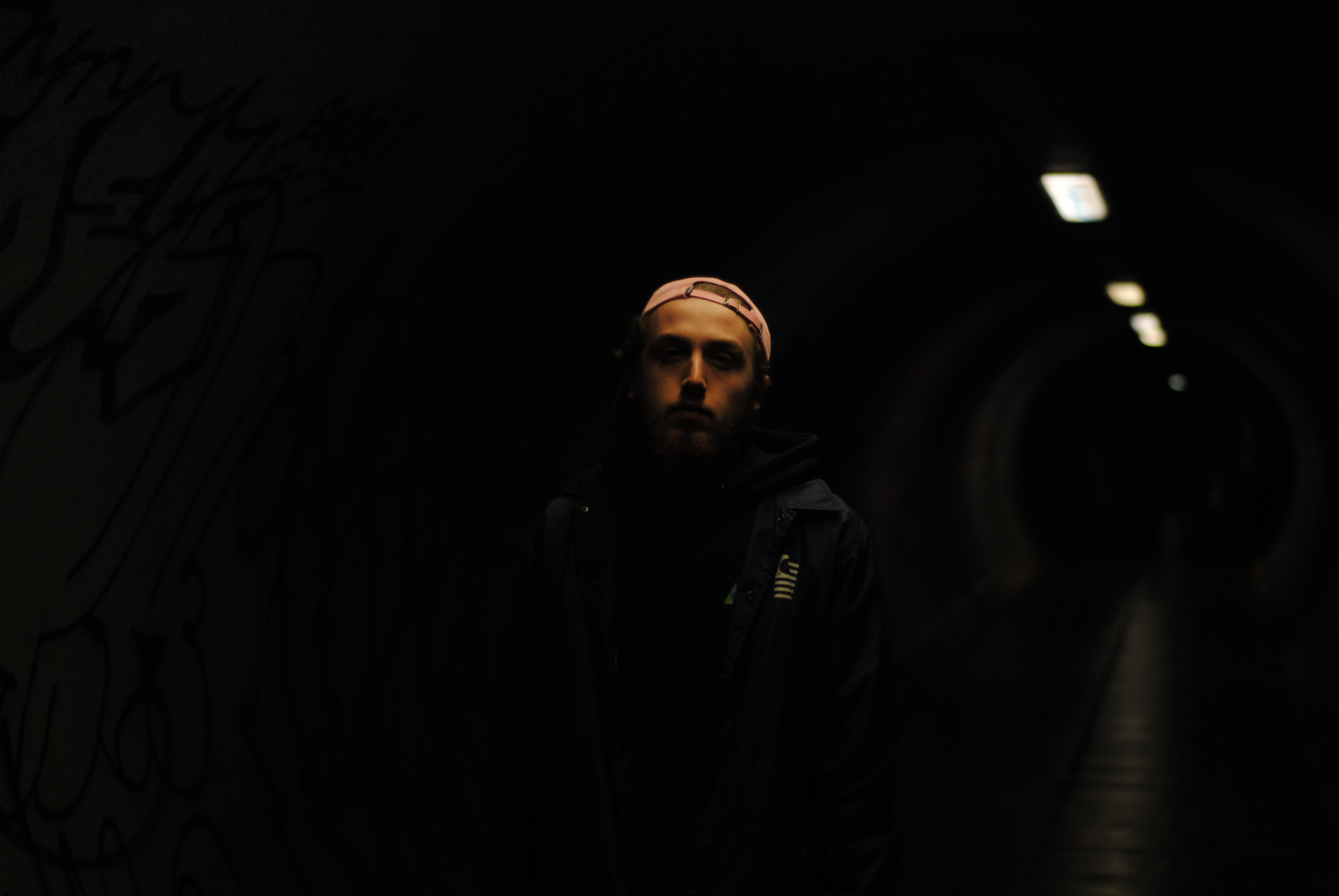 – Who or what inspires you the most?
Musically it stretches pretty far. My main influences for this project have been artists like Badbadnotgood, Chance The Rapper, Noname, King Krule, The Internet, Tyler the Creator, Anderson Paak, those are a few artists that I feel are truly being successful making the music they want to, truly expressing themselves as human beings.
Outside of music i’m heavily influenced by almost all of the situations in my life, a lot of love, loss, addiction and heartbreak. Not heartbreak just from being in a relationship with someone, but the actual feeling that can come from any situation if you care about a person or something enough. That fuelled most of my lyrics for this project.
– Have you got a message for anyone who might be struggling right now?
As I said before, it’s okay to feel hopeless & helpless but try not to shy away from your problems, try to be strong and face them head on if you can. If someone has done you wrong try to understand that they are on their own path and must learn from those situations themselves as well, if they don’t, well it shouldn’t be your problem anymore. Move on and put yourself first when it is important to. Most importantly you should talk to people who you love or trust, seek advice from them and don’t be offended if they call you out on something either as it’s usually because they care for you and want you to be happier. Shouts out to family and my girlfriend who keep me in check when i’ve acted up.
– What’s next on the horizon for you?
I’ve got some live shows booked which i’m looking forward to. I’ll be doing them solo for a little while but I’m hoping to put together a live band for shows later in the year. There are plenty of song demo’s lying around for the next release which will come later in the year and i’ve got a load of amazing collaborations inbound with some crazy dope MC’s like Springa & Stil Bizzy so keep your eyes peeled for those!
– And where can we find out more about you & your music?

Here is a few links as to where you can find me, if you’re reading this feel free to reach out and message me about my music. I would love to hear from the people, especially those who relate to anything i’ve created!