Why Do We Fall? 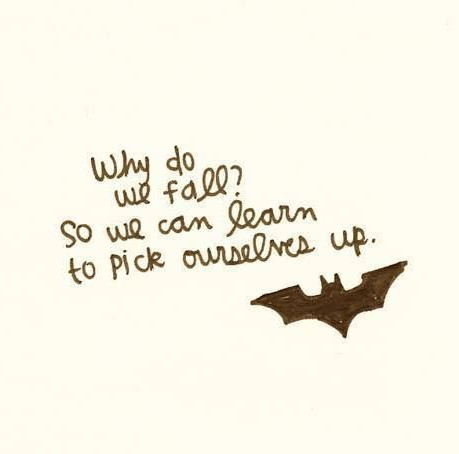 Why do we fall? So that we learn to pick ourselves up. – Thomas Wayne (Batman’s Dad)

If you’ve been following the blog posts from Heads Above The Waves, you’ll know that a while back, I watched The Bones Brigade documentary, and got all excited about skateboarding again, deciding I was going to be the next Tony Hawk or Rodney Mullen.

Turns out I suck at skateboarding.

When I was a kid, I bought a skateboard, and timidly trundled my way up and down the cul-de-sac I lived on, covered in bright blue pads, and a Dennis the Menace helmet. I was a pretty cool kid, clearly. But I was overall, very unadventurous, and gradually the skateboard got relegated to the garage.

A few years later, around the time I was playing Tony Hawk’s Pro Skater 2 (still the best game made on the Playstation), I flirted with skating again. I got it into my head that I was going to learn to ollie, and kickflip in my back garden, and then level up to dropping in on the half-pipe in the skatepark. While I was racking up huge high scores on skateboarding games, I couldn’t even get the board off the ground in real life. I fell off a couple times, and that was that. Back in the garage. I never even went to the skatepark.

But this time I meant it. I started skating with my friends in quiet parks that were out of the way. If you know you’re not very good, starting when no-one else is around is always going to be the way to go. I’ve reached a point, after skating regularly, where I can pretty much do an ollie. I’ve dropped in to ramps a couple of times, though I’m still yet to actually stay on the board as I do so..

More than that, I’ve started actually skating to and from work. Again, at first, I was pretty certain I was going to suck at it, so the first time I made the journey, I did it really late at night. I thought I’d be spending most of the time falling off, and ending up carrying my board most of the way, so I wanted to do it at a time when no-one else was around. But I actually made it!

And when I’d done it once, I could do it a million times. I now skate to work pretty much every day (weather permitting).

And I then started skating other places. It’s now my main way of getting around. If I find myself walking, it just seems the slowest way of moving ever. I love cruising around, even if people are around. Even if people see me fall off.

Cuz here’s the thing. I still fall off. As confident as I am, I still wobble. I still hit bumps that send me flying through the air. But I’ve learnt how to catch myself. Yes, I still fall off, but when I do, 9 times out of 10, I’ll land on my feet.

This is the point that I’m getting at with all this: You’ve got to fail your way to success.

When you started walking as a child, you didn’t just go straight from crawling to strutting around. You fell over. A lot. And your parents probably still have the footage to prove it.

But over time, you learnt to pick yourself up when you fell down, and then you learnt not to fall down in the first place. You probably picked up a few bumps and bruises along the way, but now, walking is an utterly natural thing, and you’re pretty good at staying stood up. But you had to fall down a whole bunch to reach that point.

I had to fall off my skateboard a bunch of times, picking up some gnarly bruises along the way, in order to get a better feel for when I was going to fall off, and subconsciously prepare for it, so I’d land on my feet rather than my ass.

And the same goes for life. By going through rough patches, you learn how to cope with them better in the future. That’s what HATW is all about: equipping you with ways to pick yourself up when you’ve fallen down.

Self-harm becomes something of a coping mechanism. Something you turn to when you fall down. After a while, like any addiction, it becomes all you know, and the thought of anything else scares you. So in the same way I did that midnight skate to prove I could make it, you may have to try something new as a coping mechanism for yourself before shouting about it and showing it off to other people. But don’t be put off if it’s hard or it doesn’t work straight away, and you fall over a few times.

Fail your way to success. Learn to pick yourself up so that the next time life throws a curveball your way, you’re prepared to deal with it, and you catch yourself before you fall.